The 2020 Election, The Markets, and Your Money

As we head toward November 3rd, investors are anxious about the effect that this momentous election will have on the stock market. Though the election results will have some market impact, the influence of other factors must also be considered:

These are the factors that we are considering as we create and maintain the proper investment strategy before and after the 2020 Election.

Look back at history and note that no matter who wins, we should look at this as any other event because the American Democracy is designed to be difficult to change.

Historically, the markets tend to do worse in the first 2 years of a president’s term and better in the second 2 years. This may be due to policies enacted by a president to accelerate the economy prior to a reelection campaign. While the presidential election receives the most attention, the ability for any president to enact economic legislation depends on the cooperation of the Senate and the House of Representatives.

The S&P 500 has had 3 negative years out of the past 16 election years while performing almost equally under each party. Of the six election years that overlapped with a down market, most had an explanation: The Great Depression and WWII in the 1940s, the 2000 Tech Bubble, and the 2008 Financial Crisis.

Trying to speculate about the market reaction to a Trump re-election or a Biden victory and indulging in fears/expectations by making changes to your investments is damaging.

Monetary and tax policies are the primary drivers of the stock market. Lower taxes increase corporate earnings and bolster stock valuations. Higher taxes decrease corporate earnings and stock valuations; however, the increased tax revenue can allow for more investment in sectors such as education, health care, and infrastructure. Reagan and Clinton benefited from falling interest rates, while both George and G.W. Bush suffered by Fed tightening, a recession, and inverted yield curve. The quiet rate environment was a benefit for Obama whereas Trump had a tighter monetary policy during his first two years.

The statement, “Don’t fight the Fed,” still holds true! The Fed will be careful to remain apolitical by not affecting the election with policy decisions. In September’s Fed meeting, the last before this election, officials said that rates will remain low until an inflation rate of 2% is achieved.

Presidents take a lot of blame and get a lot of credit for stock market performance. The truth is that the president has little direct impact on the economy and the markets. You don’t have to like who is president, but you do have to like who is in Congress. Congress has a great deal of influence on the direction of the economy. Congress sets tax rates, writes laws regulating the economy, and passes spending bills. The president is responsible for enforcing and implementing laws that have control over business and market regulation. 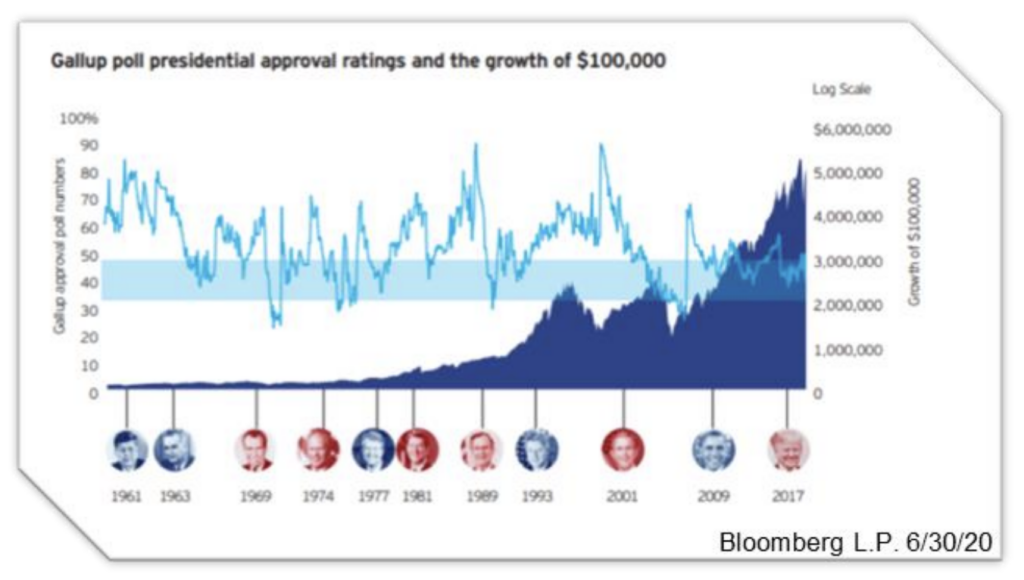 Neither party can say that they had the best economic or market performance. The market performed well under both parties. The S&P 500 has had an average annual return of approximately 11% and 3% GDP expansion over the past 75 years. This is through both Republican and Democratic administrations. According to the Gallup poll above, this means that the markets have performed well when half or more of the country didn’t approve of the current administration. 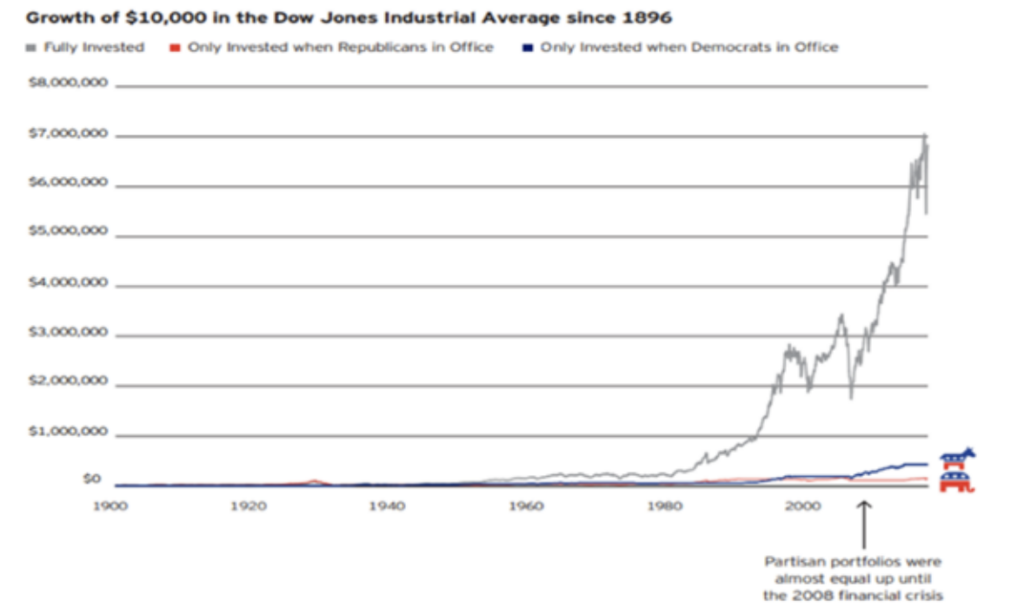 Investors who stay invested in the markets do better financially. Investors who invest only when either a Democrat or Republican is in office substantially underperform investors who stay in the market. There is always greater volatility in the weeks leading to election day, which makes investors nervous; however, markets tend to run-up just prior to election day and volatility levels out. It is not clear whether this is due to the election or is an effect of end-of-month rebalancing.

YOUR MONEY AND THE MARKET DURING AN ELECTION YEAR

This election is the 24/7 news channels’ Super Bowl. The news headlines are meant to grab your attention because this keeps the advertising money flowing in! Stressing about what might happen is a crapshoot, at best. Instead, focus on your own financial situation. Your portfolio should be properly diversified to hedge against market volatility while also providing a return that meets your risk tolerance and financial goals. Finally, consider the fact that the market has gone up and down under all the presidents, but in the end, the market remains positive!